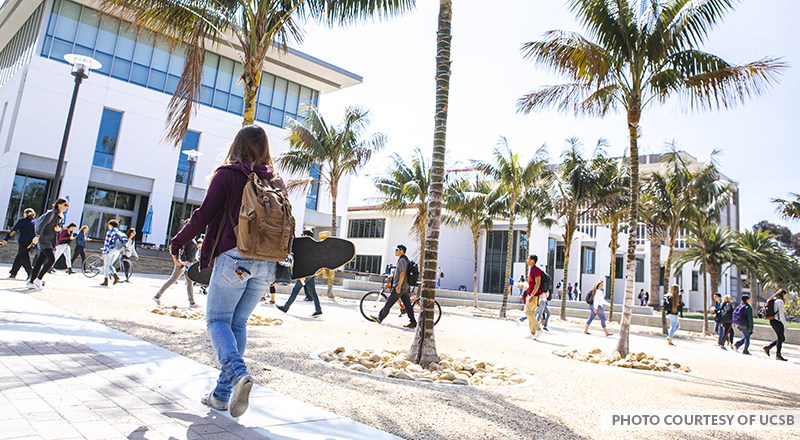 The numbers are terrifying: 1 in 5 female students and 1 in 16 male students are sexually assaulted while in college, according to national data; about 3 of every 4 students who identify as lesbian, gay, bisexual, transgender or questions/queer (LGBTQ+) experience sexual harassment on campuses. That may be just the tip of the iceberg, as more than 90 percent of sexual assault victims on college campuses do not officially report the incident.

“Despite years of prevention research and the establishment of the White House Task Force to Protect Students from Sexual Assault in 2014, sexual assault and dating violence remain prevalent on college and university campuses,” said Jennifer Wagman, director of violence prevention research at the UC Global Health Institute’s (UCGHI) Women’s Health, Gender and Empowerment Center of Expertise (WHGE COE) and principal investigator of UC Speaks Up, a collaborative project of the UC San Diego Center on Gender Equity and Health and the WHGE COE.

“Our hopes for the long-term impact of UC Speaks Up are reflected in our vision for all UC campuses, as well as all other college and university campuses: to be environments where sexual assault and dating violence are prevented and where survivors are supported with dignity and compassion,” said Wagman, who is also assistant professor in the Department of Community Health Sciences at the UCLA Fielding School of Public.

While UC Speaks Up is a research project, “our overarching objective is to use knowledge gained through our research to develop and test interventions and policies that are based on scientific evidence, to improve the health, safety and well-being of all members of the UC community,” said Wagman.

The foundation of UC Speaks Up is its emphasis on hearing from students about their experiences, opinions and concerns and seeking their recommendations and ideas. The project’s research is built on “radical listening,” said Wagman, and the belief that students are the best solvers of the campus sexual violence issue.

“Most programs for and responses to campus-based sexual assault and dating violence have been designed and are led by university and senior administrators,” said Wagman.

The University of California has been vocal about its commitment to prioritizing the prevention and response to sexual violence, sexual assault, sexual harassment, dating/domestic violence. In 2014, UC President Janet Napolitano formed a task force to combat sexual violence and sexual assault and the UC Office of the President created a website that provides information about university support services, UC member responsibilities and steps UC is taking to address sexual violence.

“Although UC students have been involved as contributors and advisors, they have not been at the helm of figuring out what to do to address these issues,” said Wagman. “My hope is for UC Speaks Up to serve as a platform so the voices of students – including both survivors and those who support them – and campus community allies are heard and incorporated into campus programs, policies, research protocols and overall education.”

UC Speaks Up’s principal investigators, who are faculty from UCLA, UC San Diego and UC Santa Barbara, lead research to understand the factors that shape intimate relationships and sexual and interpersonal violence. But at the heart of the project are the 16 student researchers who spent six months capturing students’ “voices” about good sexual relationships, sexual violence and how campuses can foster cultures that do not tolerate sexual assault and dating violence.

All researchers are trained on research ethics and qualitative and survey research. They are also trained to support survivors of sexual violence and guide them to resources at their campuses. Key to the project’s research are student research-led focus groups and in-depth interviews. Each student researcher aimed to develop a rapport with interviewees in order to foster critical discussion about a traumatic and sensitive issue.

“I see our interview and focus group discussion participants as folks advocating for themselves and for our community to thoughtfully, intentionally and transparently build our environment into one that does not tolerate any form of sexual or gender-based violence,” said Ally Power, a UCLA graduate intern for UC Speaks Up and Master’s in Public Health candidate in epidemiology.

Power, who has worked for violence prevention programs and focuses her own research on data-driven sexual and reproductive health policy, jumped at the opportunity to join UC Speaks Up.

“We hear it often, statistics from colleges across the US suggest that most students who experience sexual and gender-based violence while at school never report the incident,” said Power, who is also a student ambassador with the “Transgender students, students with disabilities, students of color, LGBTQ+ students all experience a disproportionately high rate of campus sexual violence within and among these identities. Knowing that, how could I not be called to action?”

“In several of my student interviews a common thread kept coming up: sexual violence prevention programs are so important, but we wish we had them more often and that they were more engaging,” she said.

Through in-depth interviews with members of the campus community, Power said she was “able to identify gaps and give space for folks to suggest improvements to these programs and resources based on their own experiences.”

Stoddy Carey, who graduated in June from UC Santa Barbara with a BA in Global Studies, joined UC Speaks Up earlier this year and continues his work as a research intern. “Having seen friends go through traumatic experiences, I wanted to learn more about how other students saw the issue of campus sexual assault and how the university is addressing it,” he said.

He collects data and conducts interviews and focus groups for two studies. One examines sexual violence and prevention methods at UC Santa Barbara, including the party culture and possible alcohol-based interventions at the nearby Isla Vista community. In-depth interviews include a diverse sample of students, including fraternity members, athletes and those in the LGBTQ+ community.

This summer, Carey is leading a project that analyzes data collected from male and female Division I and II athletes at UCLA, UC Santa Barbara and UC San Diego and interviews with athletic directors and coaches at the three campuses. Findings will be used to understand “what can be done to improve the ability of the UC athletic system to serve as a leader in higher education when it comes to preventing violence,” he said.

Interviews with athletic directors and coaches will examine how they address violence prevention with their student athletes and what they feel are the current gaps in their efforts.

UC Speaks Up aims to understand how coaches and athletic directors, who often play transformational roles in the lives of student athletes, can promote an environment and shape attitudes and behaviors toward sexual violence that decrease and prevent relationship abuse.

“Getting students’ perspectives on these issues is never easy because of time, schedules and apathy,” he said. “Plain and simple, many of the participants we worked with are operating on extremely tight schedules, and research is not at the forefront of their minds.”

“But the untapped information is all there in the stories, experiences, and lives of students on campus,” said Carey. “It just takes patience and lots of scheduling to access that information.”

Challenges aside, UC Speaks Up is creating a concrete picture of how students, faculty and staff perceive interpersonal violence and the resources available in their communities.

To learn more, get involved with the ongoing research, or extend this project to another UC campus, please email info@ucspeaksup.org

Sexual assault and dating violence are pervasive, not just at US campuses, but worldwide.

The WHGE COE collaborates with four university teams in Kenya, South Africa and Zambia to support, learn from and establish research networks committed to studying and preventing campus sexual violence.

“We provide technical assistance on research they are conducting to assess the scope, determinants and consequences of campus-based violence, and to design, improve and evaluate policies, programs and resources to prevent and respond to violence and harassment on and around their campuses,” said Jennifer Wagman, principal investigator for UC Speaks Up and director of violence prevention research of the WHGE COE.

The four research collaborations are: